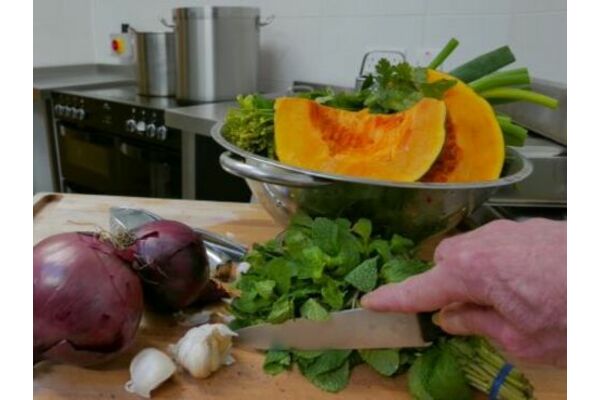 Thank you to all volunteer cooks and drivers who provide fabulous food.
4 Jun 2021

Derek is one of many who serve up delicious dinners for the shelter. He cooks for Friday nights at the Stokey shelter and catered for Christmas Day at the Manse women's shelter and for Easter Sunday.

"Delivering food for Hackney Night Shelter is a highlight of the week, volunteering is hugely satisfying I can recommend it.

For me, it’s a whole day’s work in all: sourcing the food, planning the menu, setting up the kitchen, cooking and delivering the meals on time. I often remind myself though that I never saw a courgette, artichoke or aubergine until I was in my late teens and even now I’m discovering new items to add to the repertoire such as cassava, a root veg from south America which I roast in coconut oil, it’s very popular with the guests.

Hackney is such an exotic place to find food, our Turkish and Kurdish shops for example always have delicious fresh fruit and veg. I like to deliver something new now and then as well as the old favourites like pumpkin and coconut milk soup. I try dishes of my own and find out what combinations work.

Old Gascoyne Community Centre gives me free access to their well equipped kitchen and a neighbour drives me and the food to the shelter so there’s a local contribution as well.

Providing shelter food does involve some discipline, maybe my film background helps because the timing and sequencing of the session is crucial. You have to be careful not to plan too many labour-intensive dishes, judging quantities is key and however pleased or relieved I am with the results, all the dishes have to be ready to go by 18.30 when Abi arrives ready to face the Friday night traffic in central Hackney to get to the shelter.

The shelter volunteers report back on how the food has gone down on the night. They let me know about the ethnic mix and the likely tastes of any new guests, what dishes might be popular. There’s a strong sense of team work, you meet interesting people and there’s a social aspect to volunteering.

Over the years I’d been cooking in unfamiliar locations during filming I found I enjoyed sourcing ingredients in local shops and the experience prepared me for the shelter. My real interest in cooking began in LA where we were due to interview Quentin Tarantino. The producer hired an apartment at the humble Magic Hotel and I volunteered to do the cooking in our kitchen for the week. It eventually cost a fortune since producer Paul bit on a rogue piece of lobster shell I’d left in a thermidor and had to have emergency dental treatment. To cap it all Tarantino didn’t turn up for the filming. But we eventually found someone just as interesting and the seeds were sewn, I found the cooking such fun and I wanted to do more, but I stay clear of lobster!

I was encouraged when the volunteers revealed once how guest’s spirits seem raised at meal times, they noticed the chatter and the feeling of bonhomie, the social aspects of the meal can be as important as the taste of the food. However grim guests might feel individually, the event seems to bring a sense of dignity to their temporary home life: the TLC of the volunteers, the clean table cloths and polished cutlery, hopefully all add up to help make the guests feel a bit special.

When Project Coordinator, Tricia, issues a list of the menus supplied over the week so the various volunteer providers don’t overlap I scan through it, at times it could well have come from a classy restaurant and I think well yes why not?"