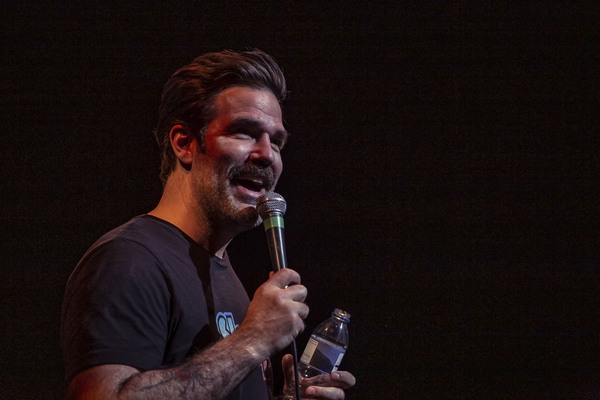 What a Belter - for the Shelter!

Once again, the community of Hackney turned out in support of the night shelter, raising laughs and money for the charity at Hackney Winter Night Shelter's annual comedy night, Belter for the Shelter.

A stellar line-up of comedians, including Rob Delaney and Nish Kumar, compered by the hilarious Daniel Kitson, entertained an audience of the charity's supporters and comedy-lovers.  Over 1200 people came together to have some fun but primarily to raise funds for a serious cause which is close to the hearts of local people.

A number of local businesses generously donated  some truly tempting raffle prizes for the event, including a fabulous pillow from House of Hackney and prizes from Morito, Moo Canoe, Shoreditch Street Art Tours and many others.  The on-the-night raffle and donations raised over £3,000.

Andrea Daniels, the recently appointed new Chair of Trustees, thanked the audience, staff and volunteers, as well as a whole host of funders and supporters, explaining that without them the shelter would not exist.

On the night, the charity launched its new video featuring one of the night shelter guests who has now been housed through the support of the Charity’s advocacy service.

The Belter held at the Hackney Empire, is one of Hackney Winter Night’s Shelter’s major annual fundraising events.  It is expected to raise more than £15,000 for the charity's work.